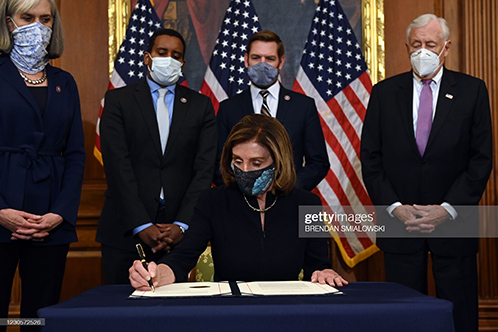 The vote of course marks the first time in history a US a president has been impeached twice; and comes a week after the Trump instigated insurrection.

“Donald J. Trump must be removed now,” said Dominican-born Congressman Espaillat of NY, as he voted to impeach while Trinidadian roots Congressman Horsford of Nevada said “Trump is unfit to serve another day in the office of the presidency.”

Jamaican American Rep. Yvette Clarke of NY, said she voted to impeach Trump for incitement of insurrection and urged the Senate to “honour our Constitution and vote to remove 45, who is a proven threat to our democracy & the livelihood of all Americans.”

Puerto Rico-born Congressmember Nydia Velazquez, also of NY, said America does “not succumb to violent insurrections incited by a head of state.”

“In America we do not turn a blind eye to high crimes & misdemeanours. No. That is not who we are. As a sworn defender of this nation’s Constitution, I will vote in favour of impeaching Donald J. Trump,” she stated.

While Cuban-born Rep. Sires of New Jersey said he “voted to impeach President Trump for a second time (because he) must be held accountable for the damage he has done to our nation.”

“The bipartisan effort to impeach the President is about holding to account a man who actively worked against the interests of American democracy by inciting a riotous mob to storm the Capitol to prevent Congress from formally confirming the election result,” he added.

The House voted 232-197 to impeach President Trump. Ten House Republicans broke with their party and voted for impeachment The Senate will not convene until next week to hold a trial for the president, according to a statement from Majority Leader Mitch McConnell.