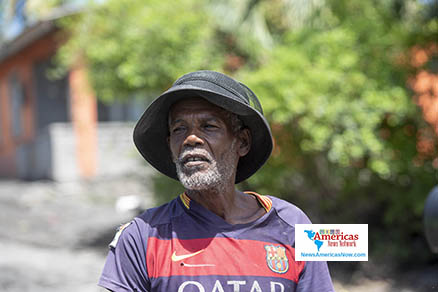 News Americas, NEW YORK, NY, Fri. May 7, 2021: The government on Thursday lowered the alert level at the La Soufriere volcano from Red to Orange but warned nationals not to return to areas considered part of the ‘Red Zone.’ However, some residents like Rafton Ceasar, never left.

The Owia, St. Vincent farmer told News Americas this week that he stayed to experience the volcanic eruption of April 9th and to protect his property.

Still, he admitted “it’s the worst I’ve ever seen.”

He revealed that the morning of April 9, 2021, when the volcano erupted, “The place got dark as pitch.”

“You couldn’t see anything,” Ceasar added. “You had to feel your way around.”

A man full of faith, he thanked God for sparing his life adding: “ I am standing here and can share the experience with my wife and my grandchildren.”

“I got some stones from the Soufriere and I put them up,” he added. “They are home in the backyard. Some of the stones broke the glass windows. But I even packed up about two packages to show people what the stone that came out is.”

“I don’t run from the volcano because I wanted to experience it,” he told NAAN. “And it was a very good experience so I can pass it on across St. Vincent and the rest of the world.”

Still McKae admitted: “the volcano is a very serious thing.”

Another Sandy Bay resident, who did not give his name, also never left the area.

“I was upstairs there all throughout,” the man, a carpenter, told NAAN, pointing to his house, damaged by the volcano. “I never left.”

Still he admitted that things are bad while revealing “there are about six of us in the red zone now.”

“It’s getting worst all the while. Right now, we need some water and food,” he said. “We have no food and no water. I called Nemo and asked them for some food, and they said they are not giving anyone in the red zone no food and water. If you don’t leave the red zone they are not supporting you. You’d have to move and go into the shelter to get support from the government.”

But he was adamant that he was not evacuating. “I’m not leaving to go there because I have my animals,” he said. “I have some pig, cattle and goats. Right now I can’t find my cattle and one of my pig or goat. But I have some pig in the corner there. So I have to stay with the animals.”

Prime Minister Ralph Gonsalves, has, however, said that even with the alert level moving to Orange, “persons can’t go into the Red Zone unless you have permission by the state authorities.”

The details of what is permitted will be published in an order, he said.

“You must not go into the Red Zone to go and live and do things like that,” he said. “It’s still very dangerous until the seismologists advise us and advise NEMO’s [the National Emergency Management Organization’s] director; and I am advised, accordingly, that the Red Zone is out of bounds, but the Orange Zone, you can go and reoccupy.”

Gonsalves said that mudflows north of the Rabacca Dry River have made the situation there more perilous than it had been a week earlier.

Meanwhile, seismologist Roderick Stewart, who is head of the volcano monitoring team, said the volcano has remained quiet over the past 24 hours.

He reiterated the PM’s message: “At the moment, there shouldn’t be anyone in the Red Zone doing any recovery and that should be strongly policed.”

“We can’t afford to let our guard down. We may change the alert level but there is still a guard that has got to be kept up,” he added.