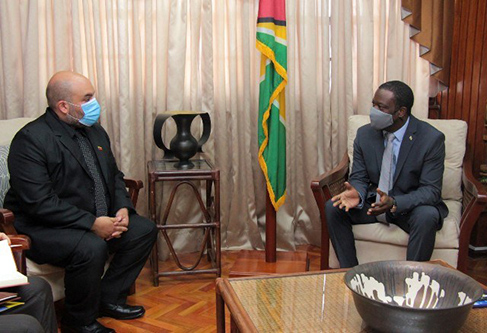 Last week, the Nicolás Maduro Government issued a decree claiming for Venezuela sovereignty and exclusive sovereign rights in the waters and seabed adjacent to Guyana’s coast, west of the Essequibo River.

Guyana’s President Dr Irfaan Ali staunchly rejected the decree as have several governments including the US and Canada.

Following yesterday’s meeting, the Guyana Department of Public Information (DPI), said Minister Todd registered the strong objection of the Government of Guyana over events that are developing in Caracas related to the attempts by Venezuela to assume jurisdiction over marine and submarine areas, solely based on unilateral action without due regard for international law and the rights of Guyana.

The new decree issued by President Maduro comes days before the world court is scheduled to hold a case management hearing on Guyana’s application for a final and binding settlement of the border controversy with Venezuela.

“Venezuela’s recent claim that it has sovereignty over the area adjacent to Guyana’s Essequibo coast is concerning. The decision is in the hands of the International Court of Justice and this judicial process must be respected,” the Canadian High Commission to Guyana posted on social media.